Hooke Audio: Do you hear that sound? It’s the future of Storytelling calling! What if you had a wireless device that let you simultaneously listen to and record audio in 3D?

Audiophiles, content producers…. prick up your ears: because Hooke headphones do just that! You can listen to your favourite tunes and capture 3D Audio at the same time! Not only does this technology allow you to hear and record your world in ways never known before it also brings your stories alive on a totally different level!

Listen, record, edit, trim, pair with your smartphone’s video camera, upload and share to your social media or stream live to your friends… say Hello to Hooke, your new affordable 3D audio headphones! Whaaaat? Yes, you heard that right! The wireless Bluetooth headphones from Hooke have built-in binaural microphones that let you listen to music, take calls and capture 3D Audio on any device at any time.

In addition to an earbud, there is a microphone integrated into the part you clip on each ear. Behind your ears and facing out, the two microphones record the sounds surrounding you to your phone. While you can go about and enjoy life, your Hooke headphones capture the ambient sound in full binaural audio recording it simultaneously on your phone’s camera. All anybody needs to share the experience with you is a pair of earbuds. And all you need to get started is a Hooke headset and the app which you can download from the AppStore or Google Play. 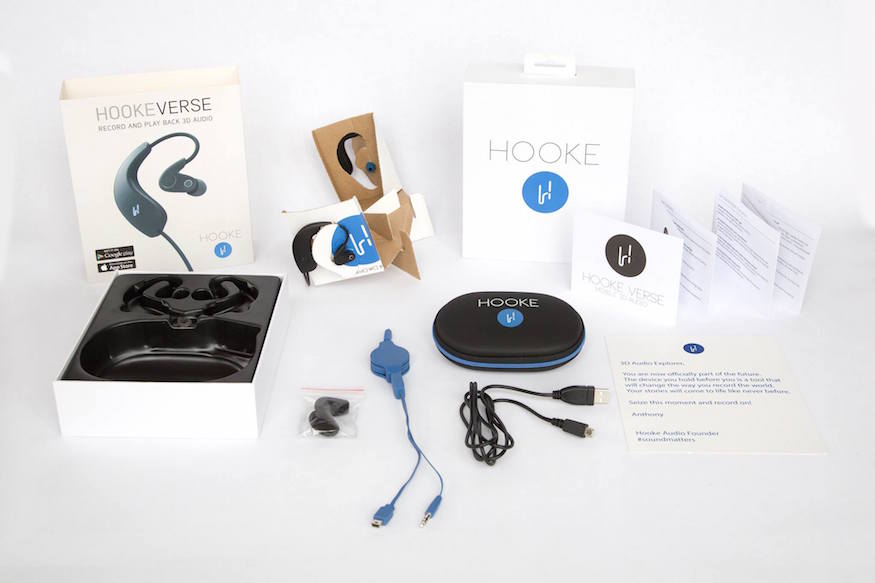 Binaural audio is amazing when it is done well. It is so immersive that it can really make you think to be somewhere, even more than a 360° video or virtual reality. You don’t have to understand the ins and outs of the technology involved to instantly realise, once you heard it, how much better this is than ordinary mono sound like that recorded with your iPhone and audible on Facebook and Instagram, for example.

Compared to an audio recording in mono, which basically means a single track that is played back identically in both ears, 3D recording captures the “in between sounds”, the nuances that standard recording just won’t capture.

Stereo microphones, on the other hand, already provide a better sense of space as they play back a different audio track in each ear. 3D sound, however, can be an out-of-this-world experience as it allows to replicate sound exactly the way your ears hear it! Coming from the left, the right or from behind, binaural audio recreates the sounds surrounding you in all their subtleties. It is almost as if your brain was tricked and served the full spectrum of sound waves in a 360° space.

Can you imagine experiencing Tomorrowland, a classical concert, the sounds of the Amazon or a Football match in that way? WOW! The difference between this and mono – or stereo even – is remarkable. To experience it, you don’t need anything special. Just put on your headphones and watch this video for a glimpse at what 3D audio can do.

So, if it is as awesome as this, why can’t everything be recorded that way? Well, the answer is: because of the technology involved. Binaural recording rigs are usually quite pricey. Hooke founder, Anthony Mattana, a Broadway sound engineer, was looking for ways to make the technology more accessible. He had a relatively simple idea: how about integrating the tech into something smartphone users (aka “all of us”) are already wearing most of the time anyway – ding ding ding – headphones!

The challenge was to create a wireless, Bluetooth enabled version that would allow the user to wear it, walk around freely and listen to their music while overriding the built-in microphone as soon as switching to the recording mode. No need for extra equipment, no stops, no extra steps, just the seamless transfer from “listening” to “recording” in CD-quality 3D audio.

All you have to do to record binaural audio or video is open the Hooke app and press start. There are in-app controls – that you can use if required – for adjusting audio gain or brightness, for example. Other than that your phone will proceed to capture the ambient sound as usual, only in beautiful, crystal clear, three-dimensional binaural quality.

For the viewer, the sense of immersion is more intense as they are experiencing the soundscape as it surrounds you in 3D.

Let’s be clear though: this does not compete with a recording taken off a sound desk. It is a “grab-and-go” solution allowing you to transform standard smartphone recording – at a theatre or concert for example – into something comparatively amazing to share with your friends online.

Hooke is great for listening to Spotify, GooglePlay, iTunes, Pandora, for hands-free calling, for gaming on devices like Xbox or Playstation, for Podcasts (radio, books and live events), for Social Media, TV, home movies, music recording and live streaming. 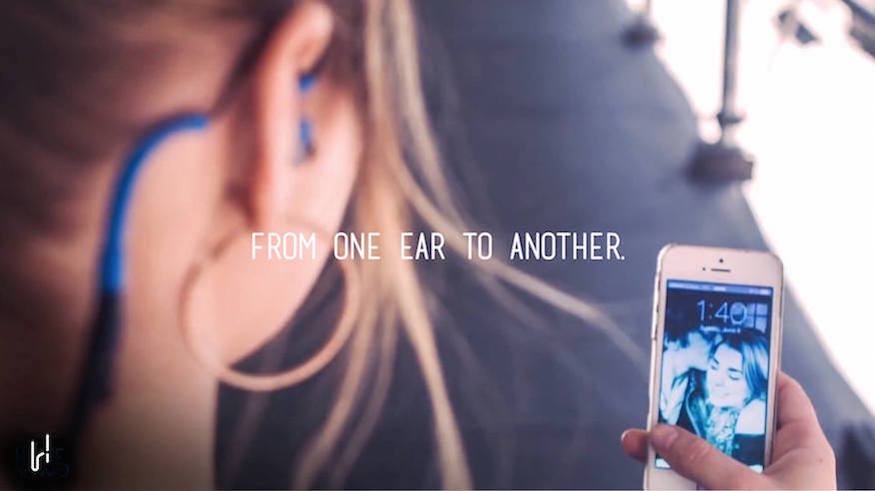 Binaural microphones and Bluetooth headsets are nothing new per se. 3D audio recording neither. So what is the innovation here?

Well, first of all, it is the fact that it is all integrated into one single, easy to use, wireless item. But the real big deal is the software: the Bluetooth communication codec that the Hooke Verse uses to connect to talk to your phone.

Because a basic codec does not allow transmission of stereo audio from a Bluetooth microphone to a phone, Hooke created their own to solve exactly that issue.

This is a major innovation which inspired thousands of people to back the project on Kickstarter and to help it to success. There has never been a codec before that allows to send dual-channel, lossless, 16-bit, 44.1k wav files via Bluetooth at 0.0043 milliseconds of latency, nor has there been a product that had this type of codec incorporated before. So, what any proud owner of a Hooke Verse holds in their hand is a piece of patented, trailblazing tech indeed!

The advantage over other forms of recording binaural: rather than having to compose a video with separate audio files, with Hooke the binaural sound is already part of your video recording because it is recorded with the video on your phone. You simply record the visual and audio track at the same time, then upload the video to Youtube & Co. That’s it. No extra gear, no extra steps. Just simple, seamless mobile recording that will let viewers immerse in your experience as if they were there.

The Verse can be wireless or wired and works on Apple as well as Android. It does record via Bluetooth thus avoiding sounds coming from the cable rubbing on clothes, hair or skin, while you are walking, for example. However, it comes with a wired connection so that you can plug in with any other audio recording device (GoPro etc.) via cable.

If you care about sound quality as much as you care about video quality, the Hooke Verse is definitely for you. Over-ear headsets with Bluetooth in-ear headphones and built-in microphones on the back that let you record all your smartphone video with 3D binaural sound… it’s a huge leap in audio quality and allows you to create truly immersive content. Now you can create and share memories with the sound captured identically to when you heard it.

A wire behind your back connects the headphones. So you can take them out and just let them hang around your neck whenever you want. There are several tip options, too: different sizes and materials like silicone or memory foam that you can choose from.

The Verse has only one button. It lets you control power (hold) and play/pause (tap).

A fully charged battery lasts about 9 hours depending on usage – more if you are just listening, less if you are recording.

If you really want to step up your sound game, you can get some basic audio filters, like a “concert” filter via in-app purchase. A small investment that lets you access functions such as echo, delay, reverb, wide stereo and noise cancellation and gives you a taste of the magic of sound engineering.