Among the smoky whiskies, Laphroaig is considered a particular legend. Elegant, pure and incomparably peaty-smoky. This is Laphroaig from the famous Isle of Islay on the west coast of Scotland.

Friends of Peaty Whisky, we’re thrilled to present you today’s giveaway: a Laphroaig gift set! Something you can enjoy by the fireside! 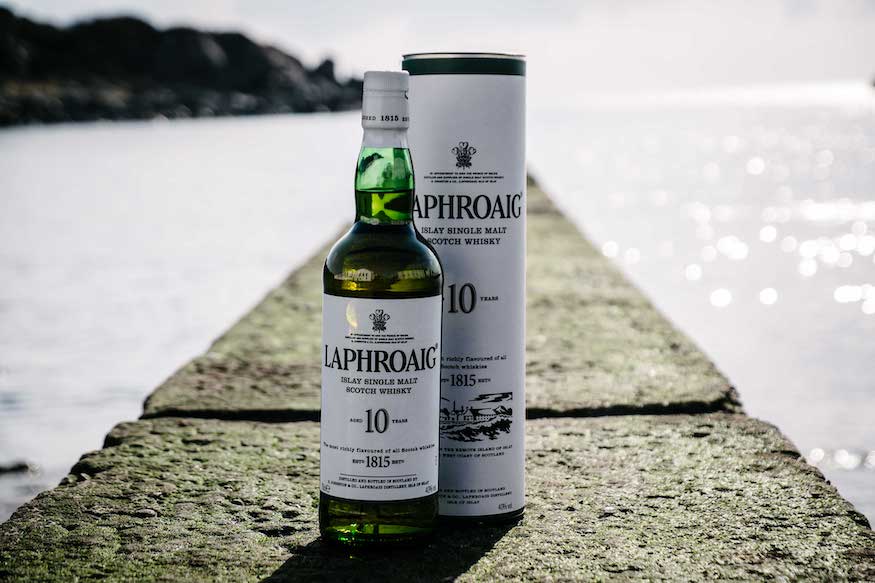 The giveaway is now closed. The winner is:  Hakan A. Congratulations!!

If you would like to keep informed about Laphroaig – Brand and product News, Recipes, Events, Gift ideas – subscribe to the Fabdrinx-Newsletter by leaving your eMail here below.

To double again: share this giveaway in your Social Media with the tags @coolbrandz @laphroaig so we won’t miss any of your communications.

This giveaway is intended for our readers of legal drinking age and must not be shared with people below the age. It runs until 24.12.22 across all our digital channels. Each participation in every channel counts and increases your chance to win. On Boxing Day, the winner of this gift will be determined by lucky draw. Thank you for following our adventures. We are delighted to know you are part of our community. Have fun counting down to Christmas with us and Good Luck! 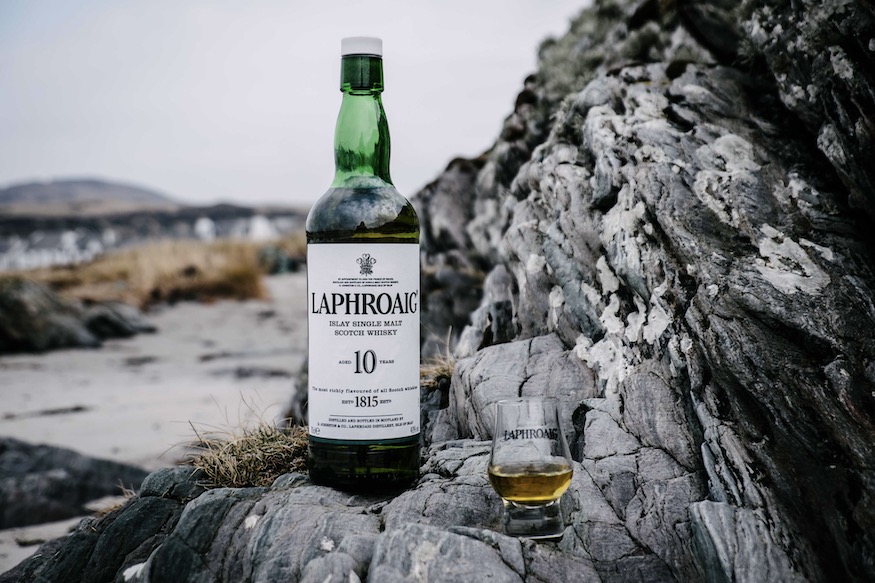 Laphroaig: The finest whiskies from the Scottish Island of Islay

Islay is often referred to as the “Queen of the Hebrides”. Despite its small size, it is home to several well-known whisky distilleries and is known worldwide for its smoky and peaty single malt whiskies.

Laphroaig is one of the most exceptional whiskies, the result of over 200 years of unique whisky-making tradition. It is the leading peaty-smoky single malt whisky on the Austrian market with a steadily growing fan base.

The direct location of the distillery on the Atlantic gives Laphroaig the unique smoky-peaty aroma with the characteristic flavors of iodine and sea salt. For the production, malted barley is dried over a peat fire.

The smoke of this special peat, unique to Islay, gives Laphroaig its unique, rich aroma. An unmistakable taste that tells of the land where Laphroaig is born. 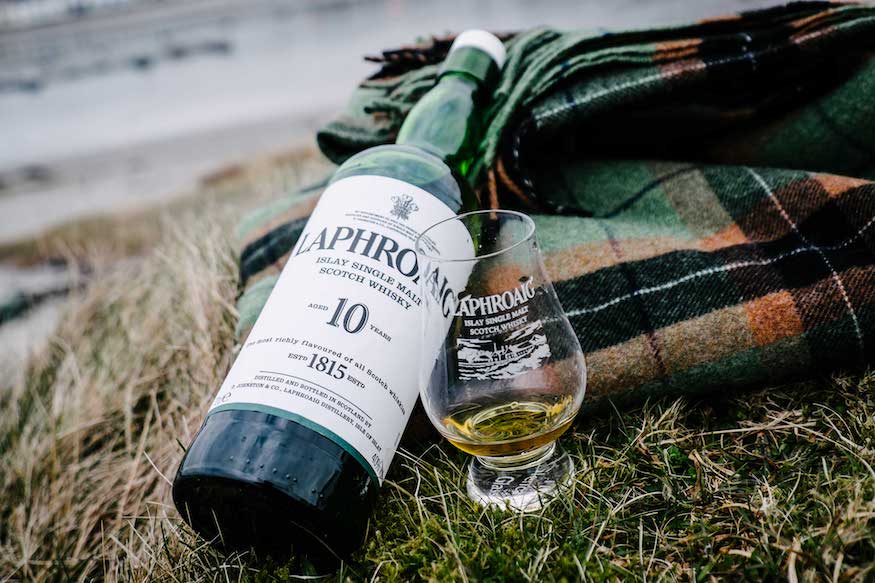 Laphroaig is Gaelic and means “The beautiful hollow by the broad bay”.

Since the distillery’s founding in 1815, the managers of Laphroaig Distillery have been the keepers of a secret that gave birth to a tradition of whisky making. From distillery founders Donald and Alexander Johnston, who opened their own distillery on the south coast of the island in 1815, to Ian Hunter and Bessie Williams, to late 20th century greats and current manager Barry MacAffer this process is nurtured and nurtured, always passed on to the next, developed further and shaped anew by every manager of the distillery. 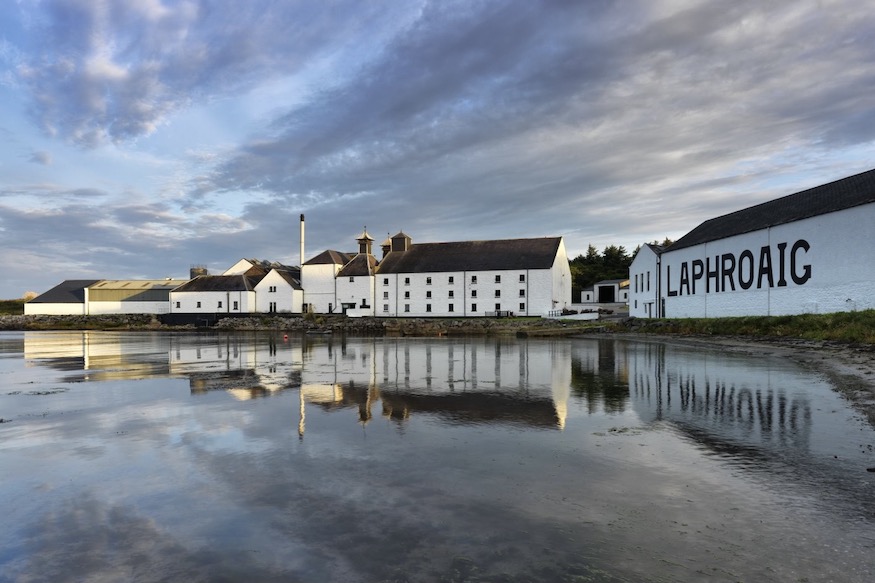 MacAffer, who grew up on Islay, has a deep familiarity with the distillery and its distillery managers. Today it is precisely this tradition that flows into the creation of each and every drop of Laphroaig. By the way, Laphroaig is pronounced “La-froyg”.

Lovers of Laphroaig know its most famous patron from the unmistakable coat of arms proudly displayed on every bottle of Laphroaig. In 1994, His Royal Highness Prince Charles, now King Charles III, paid a visit to Islay in person and during his visit bestowed his Royal Warrant. This made Laphroaig the purveyor to the Welsh court. Since then, every label has adorned the majestic Welsh crest. 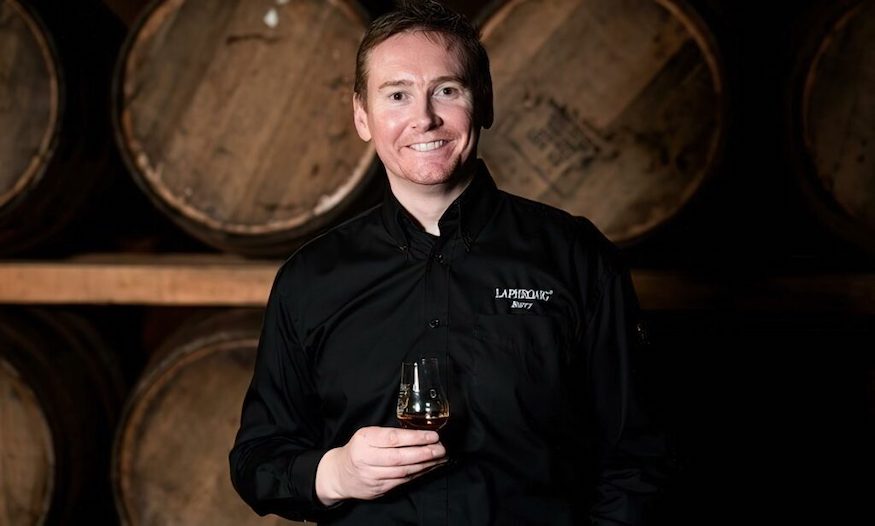 The Pillars of Laphroaig

At three stations, journalists and partners of the House of Laphroaig could discover the three pillars of Laphroaig – peat, fire and salt – and learn interesting facts about the distillery on Islay, the traditional history and the manufacturing process.

The event was moderated by the leading Viennese restaurateurs Karl and Leo Wrenkh (known for their restaurants in Vienna’s 1st district, Bauernmarkt and Rauhensteingasse, and the Kochsalon), and spirits expert Erhard Ruthner.

PEAT: What makes Laphroaig whisky so special? What’s the secret?

Quite simply, it is the essence of Islay itself: the peat. As there was no extensive forest or shrubland on Islay at any time in the past, peat – the only fuel ever found to dry malted barley – is made up of peat dust (also known as “peat moss”) to a much greater extent. This moss gives Islay’s whiskies their unique flavour.

But of course no two peat bogs on the island are the same. Glenmachrie peat stands out, a special blend of heather, lichen and moss that provides Laphroaig’s smoky, iodine-like and medicinal flavor profile.

Because Islay’s peat bogs are so crucial to the distinctive Laphroaig flavor they are tended with the utmost care. The peat is still cut by hand and the beds are regularly filled up.

It’s been done this way since 1815, when brothers Donald and Alexander Johnston leased lands from the squire of Islay, only to discover that distilling was more profitable than farming. This was the birth of a whisky with the distinctive peaty, earthy flavor that is now known as Laphroaig. It is the Islay peat that gives the whisky its unique personality. Read more on: Tales of Peat >>> 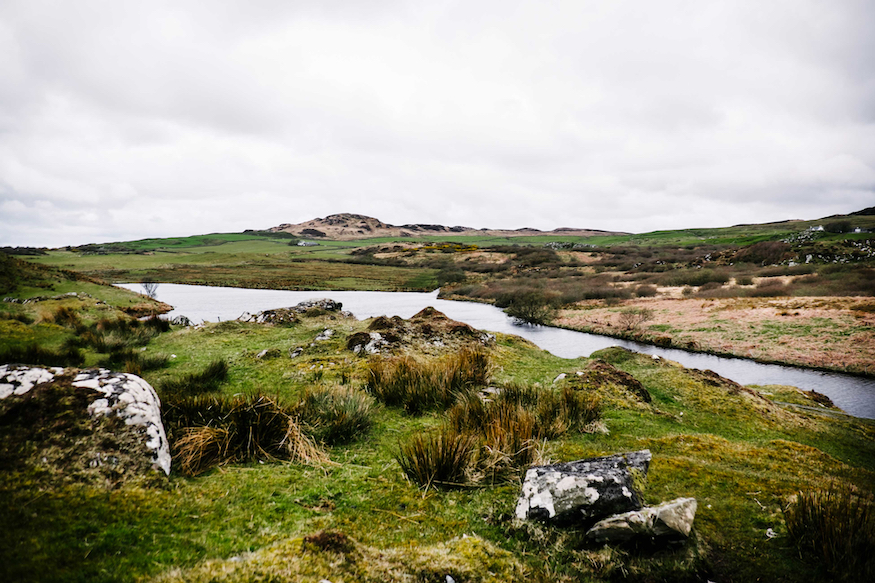 FIRE: When Ian Hunter became sole proprietor of Laphroaig Distillery in 1927, he made the radical decision to establish his own malting floors at the distillery to help combat Islay’s shortage of commercial malt.

Using the same kilns – the kilns that workers used to cook their food in as early as the 1840s – Hunter used traditional methods of malting with peat and cold-smoking barley to give Laphroaig whisky that distinctive smoky aroma that is still enjoyed today appreciated worldwide.

In the peat ovens, the peat is burned to impart the smoky flavor that is characteristic of Laphroaig to the barley. Unlike many other distilleries, Laphroaig peats before drying.

This process takes around 17 hours. The smoke rises from the ovens through the air-permeable drying floors to the barley. Read more at: Tales of Fire >>> 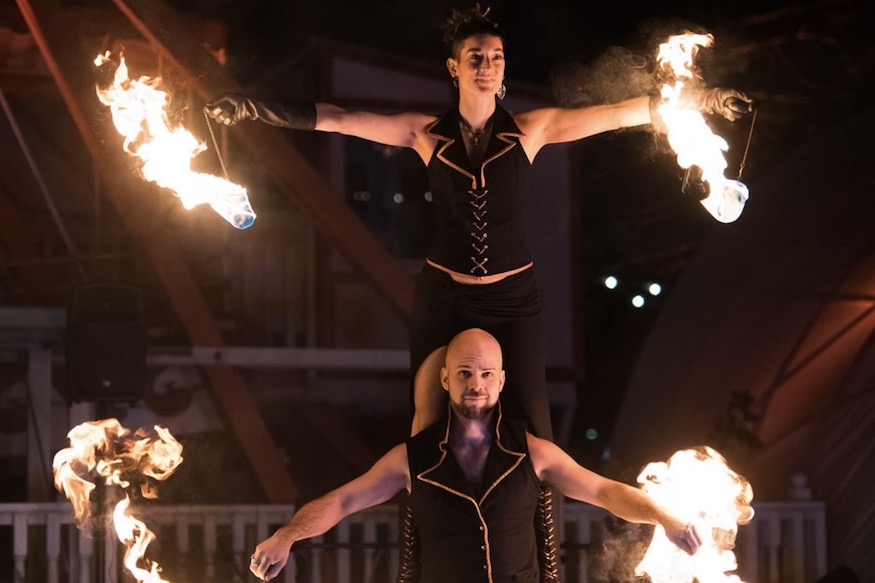 SALT: On the rugged shores of Islay Bay, braving the rough, wild weather of the Atlantic, Laphroaig’s iconic warehouse has stood in the Islay countryside since 1924.

To this day, where land and sea meet, Laphroaig casks whisky with an unmistakably salty note, thanks to the stormy Atlantic climate. Read more on: Tales of Salt >>> 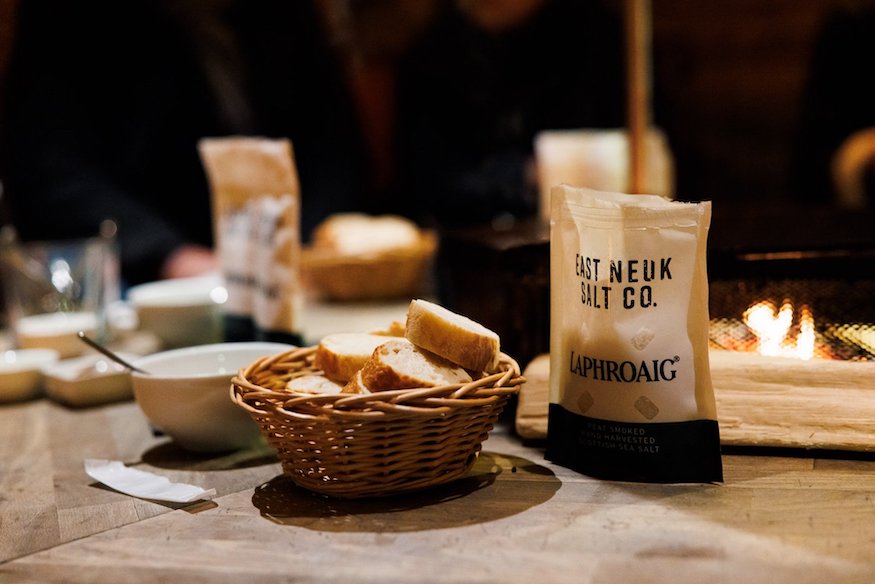 Exquisite moments of pleasure with that special something. A single malt as unique as Laphroaig is best drunk neat, unadulterated and at room temperature, just like the Scots do.

A few drops of added water in the whisky glass can break down the whisky even more and help it to develop its delicate variety of aromas even more.

But in principle, whatever pleases and tastes good is always allowed – so if you want, you can enjoy your Laphroaig on the rocks with ice or mix it creatively with a clear conscience. 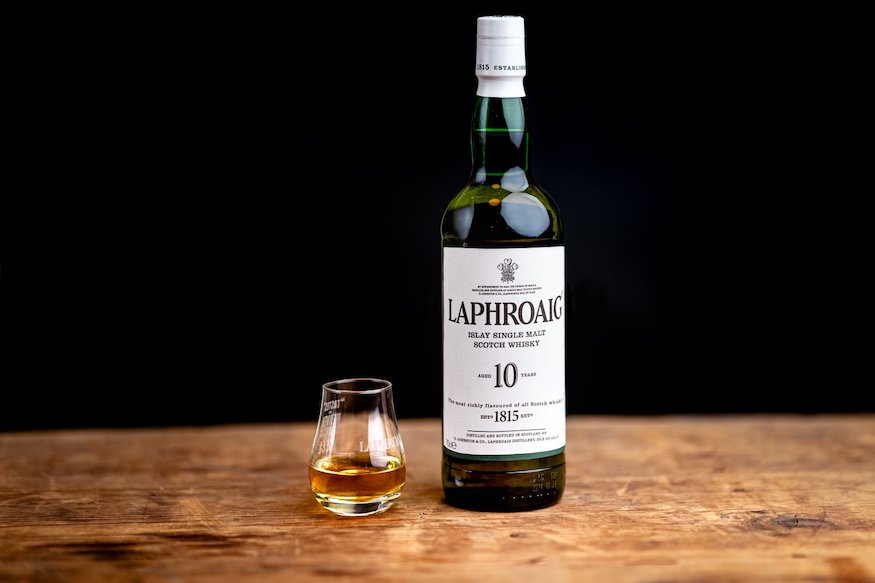